ZELUS describes the Phase One renovation of the New Orleans Superdome, for which it provided pre-construction services. The Superdome was originally built in the 1970s and has become one of the most iconic sports stadiums in the US. It remains the largest fixed-dome structure in the world.

The New Orleans Superdome, located in the Central Business District of New Orleans, Louisiana, was built in the 1970s, officially opening in 1975. It has become one of the most iconic sports stadiums in the country and remains the largest fixed-dome structure in the world (Figure 1). It is also the world’s largest, entirely steel-constructed arena unobstructed by posts or columns. The structure comprises 20,000 tons of steel and spans roughly 2.6 million square feet. The dome alone spans an area of 9.7 acres and sits 273 feet above the floor. Needless to say, it is a complex building. 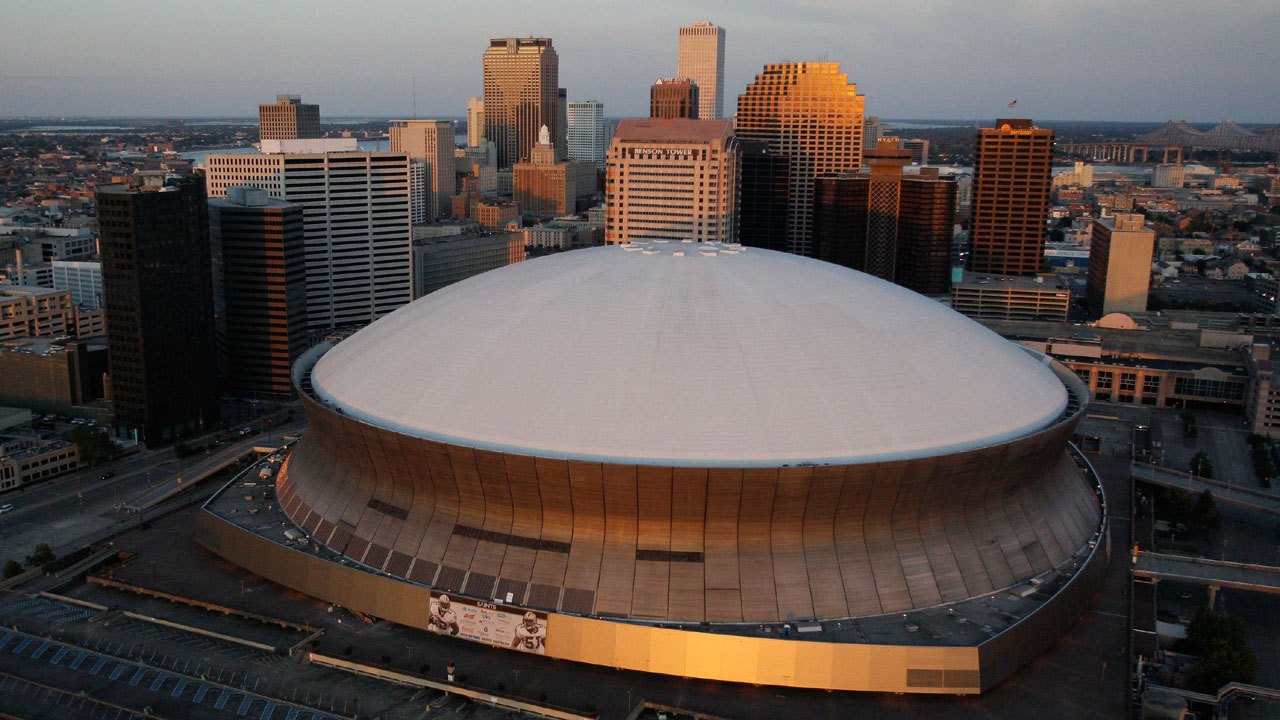 In 2019, phase one plans were approved for a multi-year, multi-phase renovation to be executed by Trahan Architects. Trahan Architects’ first phase of work began in 2020 and was primarily focused on an expansive interior overhaul to enhance the quality of the experience of the spectators. ZELUS was brought in pre-construction to create a BIM as-built of existing conditions that would aid in schedule compression, advance clash detection, reduce rework, and ultimately provide all stakeholders involved with a highly accurate model to inform decision making.

The Superdome is very special to the New Orleans community, and so it was important for Trahan Architects to tap local talent for this project. To help execute with the data collection, modeling, and QA/QC process, ZELUS partnered with several local companies including M3 Design Group, One to One Design, and Studio Cicada. In total, this collaborative project involved 13 companies from across Louisiana, New York, and Arizona.

What were the main software applications used for this project, and how were they used?

Because of the size and scope of this project along with the number of stakeholders involved, it was critical that everyone was operating from the same playbook. BIM 360 provided the foundation for that.

The ZELUS team traveled to New Orleans to laser scan the entire building, with a focus on architectural, structural, and mechanical systems (Figure 2). Using RTC360 and FARO scanners, and working around the clock, we were able to complete the scans within one month (Figure 3).

Figure 2. The laser scanning process by the ZELUS team in progress.

Figure 3. The completed laser scan of the Superdome.

ZELUS delivered Recap point cloud files and fully developed Revit models within just four months (Figures 4 and 5). These were divided into architecture, structural and mechanical systems. We used BIM 360 to deliver the models and create a collaborative environment across the 13 teams who’d be utilizing the data. Since the teams — which comprised contractors, architects and engineers — were distributed across various regions –– New Orleans, New York and Arizona –– having a single source of truth to refer to and a centralized place to collaborate was mission critical to the success of this project. 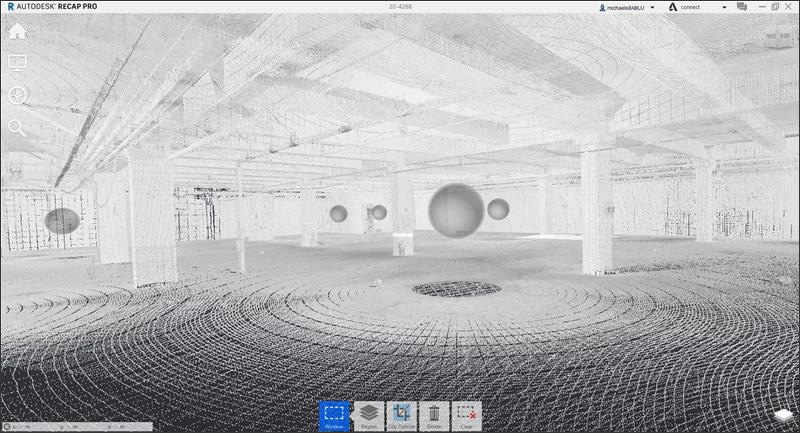 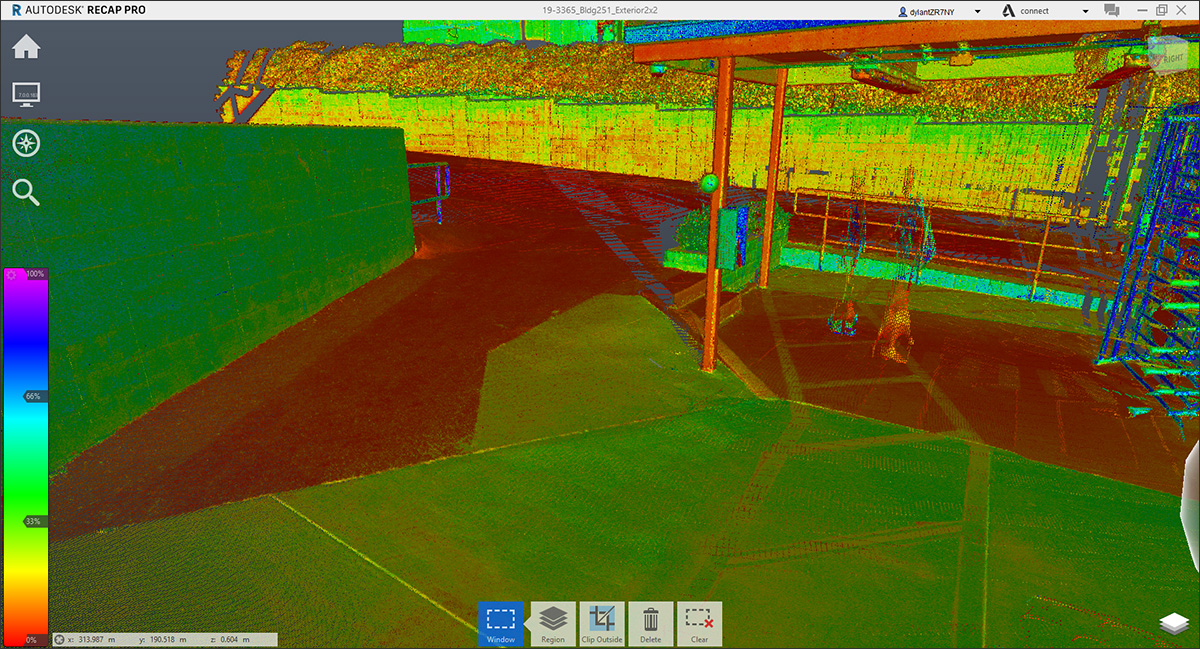 Figure 4. The point clouds in Recap. 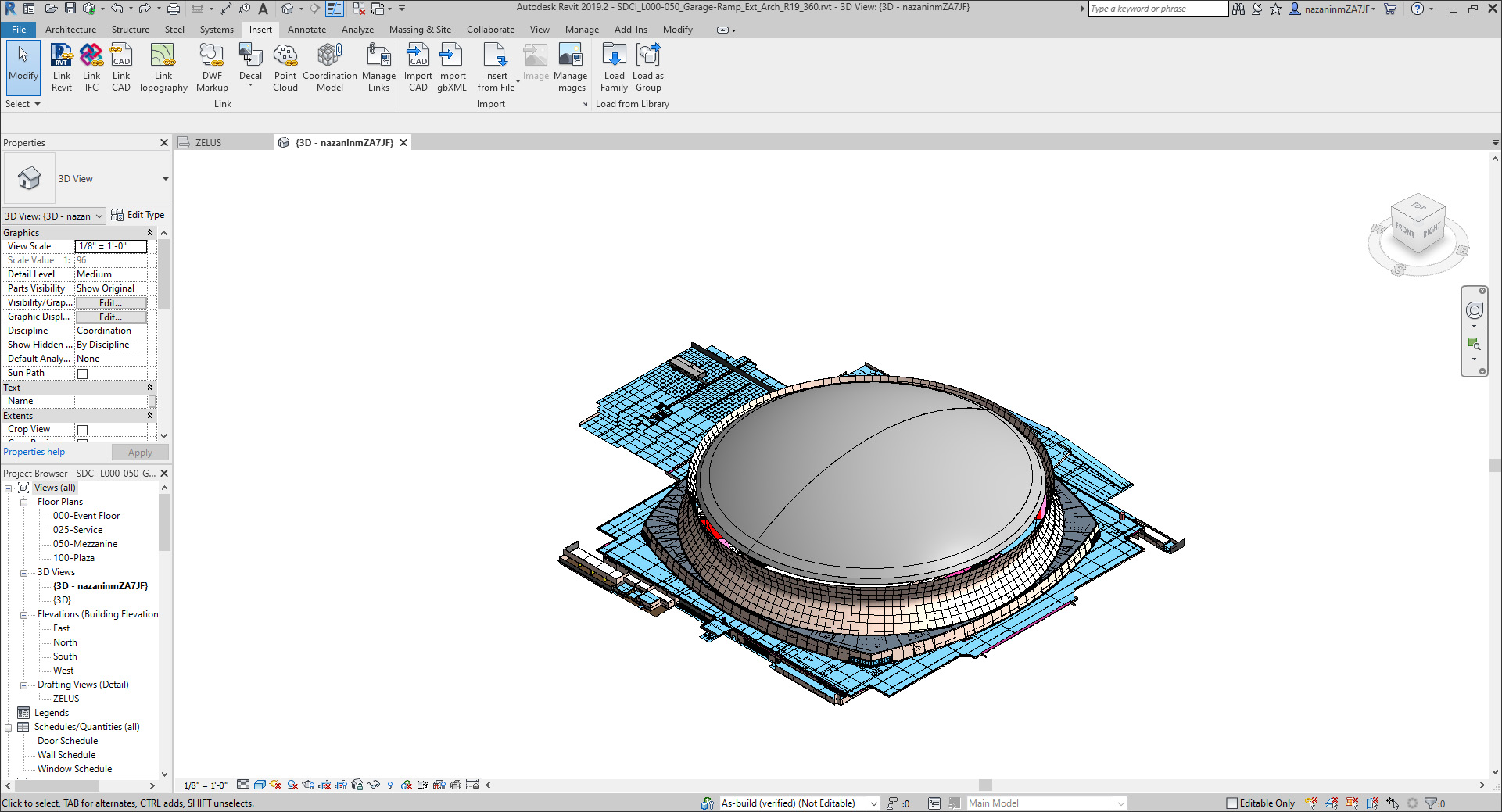 This project was dense in terms of MEP and structure requirements due to the curved shape of the building. This required us to model some elements of the building in separate pieces to create the shape with 0.5-inches accuracy to represent existing conditions.

Additionally, we had to scan more than 300,000 objects on a pretty condensed timeline. To achieve this, we mobilized eight scanners on site working 24/7 to complete the laser scanning. Because this 3D model was to be used by numerous stakeholders, we implemented an intensive QA/QC process that involved M3 Design Group, One to One Design, and Studio Cicada (collectively referred to as Tri-Corp). ZELUS completed 70% of the modeling and TriCorp the remaining 30%. To do this effectively, we created a QA/QC workflow, providing feedback on each other’s models.

Most of the other methods used were traditional, but because this was such a massive project, we had to invent a few workflows. For instance, we installed interstitial brackets to capture the areas above the ceiling. This gave us visibility into the piping and other systems in that space.

We also used BIM 360 to establish easy remote collaboration among distributed teams. We’re now using this internally at ZELUS. The use of the RTC360 scanners was also new for us. This is what enabled us to scan as fast as we did. Once captured, this data was then registered inside the point cloud processing software, Cyclone (Figure 6). 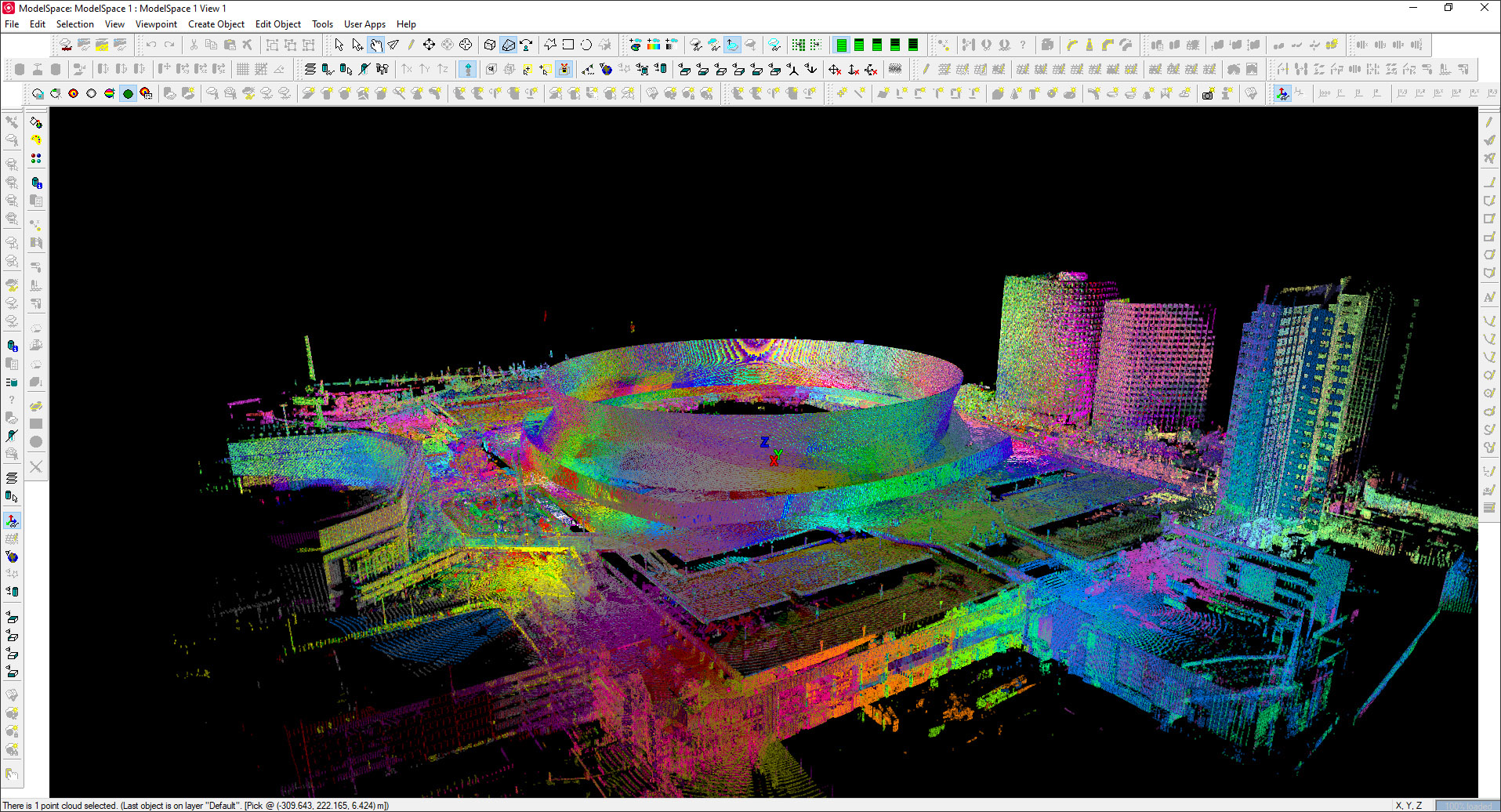 Figure 6. Use of the point cloud processing software, Cyclone.

Using the BIM as-built has proven mission-critical to this project. With a structure as complex, grand in scale, and iconic as the Superdome, everyone working on the project has to know what they’re getting into before construction begins.

We were able to complete this project within just a few months and with extremely high accuracy, which is almost impossible for any large-scale project. With the scan data provided to the client, they will now have the ability to go back and measure any additional elements as well that were not in the scope.

Also, with the use of 360 Virtual Site Walk (Figure 7), we were able to eliminate field verification trips, significantly reducing the cost and schedule.

The sheer size of the stadium, the number of scanners we had to deploy, and the size of the team presented some organizational challenges. There were so many objects to scan and with that many people working on it, we had to make sure we captured it all effectively and didn’t duplicate efforts. But with the right workflow established and the use of the RTC360 scanners, we were able to get the entire stadium scanned in the first six weeks (averaging approximately 100 scans per day).

That led to a second challenge, however. We had collected roughly 300,000 items directly off the point cloud, which produced more than 2TB of data. We had to find a way to easily upload and share these massive data files with everyone involved.

Additionally, because the Superdome is dense in MEP and structure due to the curved shape of the building, we had to model some elements in separate pieces to create the shape with 0.5-inches accuracy to represent existing conditions.

Luckily, we have a research and development department that enables us to find creative solutions to specific issues. One was the smart cloud and the reduction of point clouds. This was necessary to turn these data points into the existing model and make the data lighter. There is no available software for this, so we created it in-house (Figure 8). We also had to create a lot of unique elements within the model to make sure it was an accurate representation of what was there. 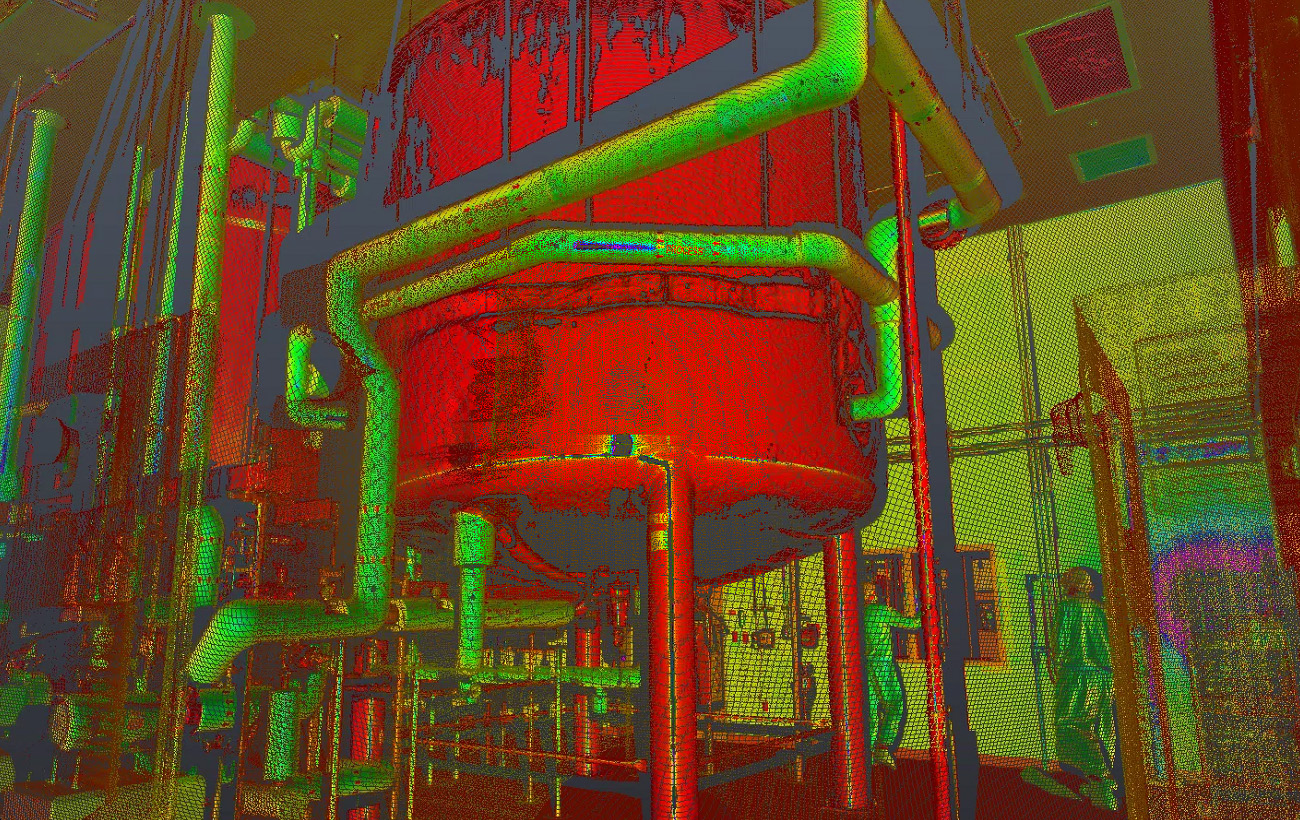 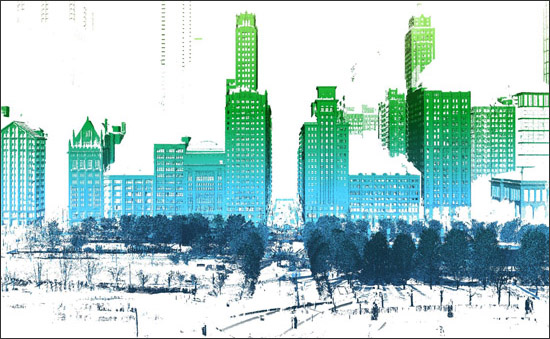 Tucker Cedarleaf of Cedar+Mac, who has been working with laser scanning equipment and software for over 10 years, shows how and why traditional laser scanning tied to survey control is the only method of 3D capture that produces baseline data of the quality and reliability required for AEC industry use. 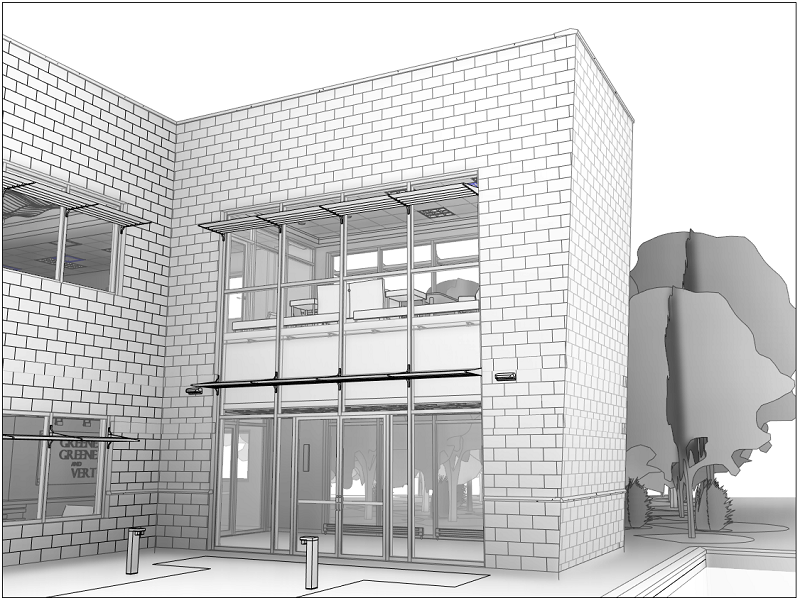 Mortenson, one of the top builders and developers in the US providing a complete range of construction services, shares its perspective on AEC technology in this Firm Profile.

KAI Design & Build, a design & build firm performing architecture, engineering, and program management/construction management services nationwide in the US, shares its perspective on AEC technology in this Firm Profile.