Reality capture is the term used to describe various types of technology used to collect 3D data of environments and objects. The three main types—photogrammetry, infrared scanning, and laser scanning—all effectively “capture reality,” but with varying degrees of quality, accuracy, and range.

With rapid developments in 3D scanning technology over the past thirty years, capture is now faster and easier than ever, taking form in high definition terrestrial systems, aerial photogrammetry systems, handheld infrared systems, and everything in between. 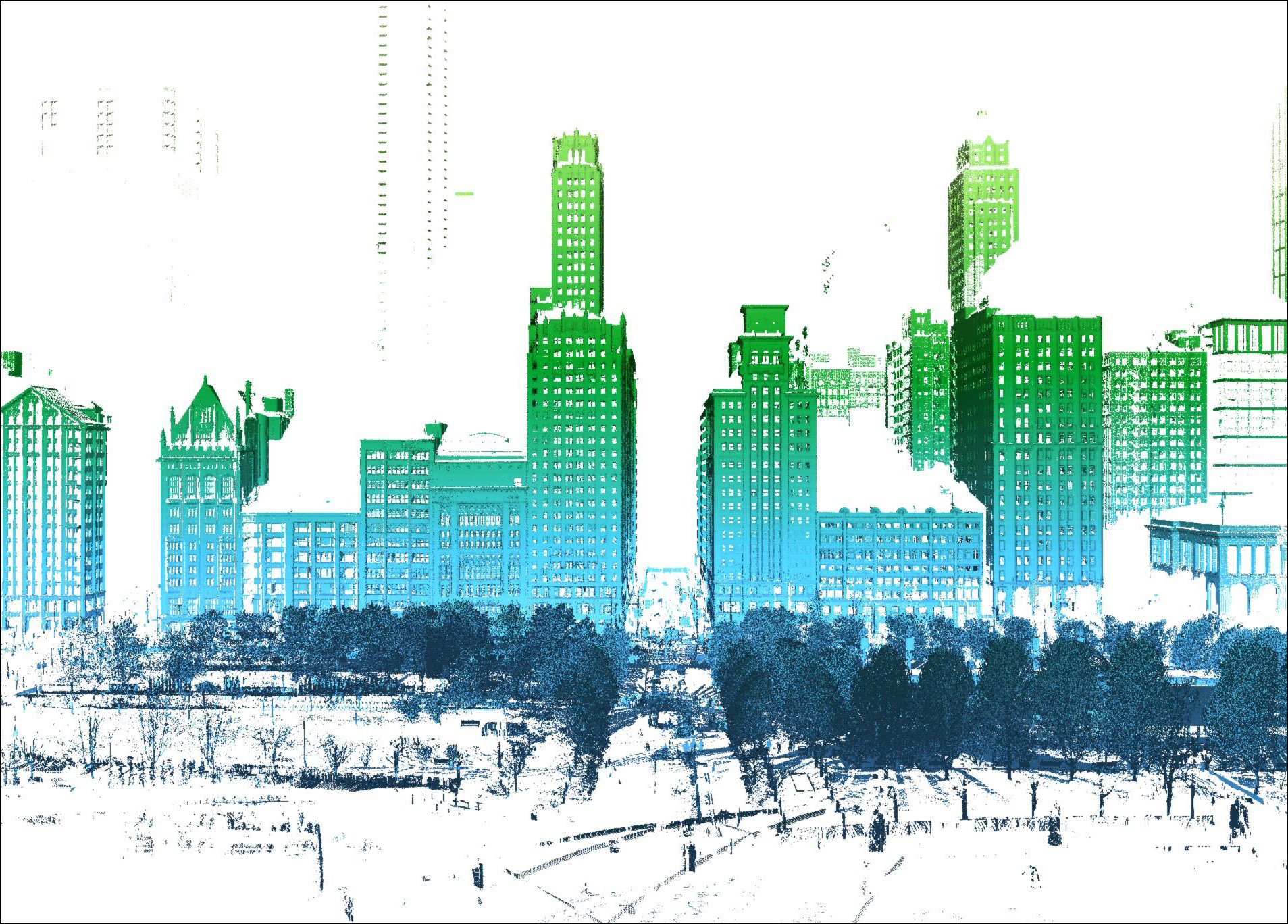 Reality capture is still a young industry. With its youth, come disadvantages rooted in lack of education and understanding. Many users have made two pernicious assumptions, first, that all reality capture is equal, and second, that it’s as simple as taking photographs. This thinking makes room for swindlers to sell bad services and for users to find themselves with unmet expectations.

Architecture, Engineering, and Construction is an industry built on necessary accuracy. And lack thereof results in a number of negative repercussions, such as law suits, change-driven-delays, etc. There is little room for error in AEC.

Traditional laser scanning tied to survey control is the only method of 3D capture that produces baseline data of the quality and reliability required for AEC industry use. Not only does traditional laser scanning produce the highest quality data of any of the 3D capture methods, but if tied to survey control, the data is also objective. When the data is objective, it is useful and invaluable.

The quality of the data collected by a laser scanner is far beyond that of other 3D scanning alternatives due to two of the technology’s characteristics: time-of-flight recording from a fixed position, and the ability to tie those individual fixed-position scans together by using the traverse survey method.

Laser scanners scan from a fixed position on a leveled stationary tripod. These scanners use time of flight to calculate distance. As the machine makes a full rotation on a vertical axis, its sensor spins rapidly on a horizontal axis, sending out the laser points. When the laser pulses from the scanner, it hits an object and bounces back to the sensor. The time it takes to come back is converted to a distance measurement. Scans are precise, as the only variable to account for is the presupposed, pre-calculated rotation of the scanner.

Not only are the individual scans from a laser scanner precise, using the traverse survey method is the most precise way to register the scans together. Traverse scanning is a basic survey technique. The scanner plummets over a survey point and front-sights and back-sights to targets over other survey points. By traversing throughout a site, the scanner knows the exact point at which it will register two scans together and how the point is aligned in space. Traverse scanning is also the only method which allows for the data to be properly tied to survey control, which I’ll explain more in the next section.

An infrared scanner, on the other hand, is not suited to attach to real world coordinates, as it is in motion as it scans. Infrared scanners rely on inertial navigation systems which track where the scanner is in relation to where it has already been. Infrared data is able to attach to real world coordinates, but not accurately enough to call it objective.

Unlike laser scanners, infrared scanners are handheld and do not scan from a fixed position. The scanners constantly project a structured pattern of beams which is recorded by a frequency-matched infrared camera. This technology relies on frame rate of the camera and movement of the system. Often the structured light bounces back erratically which confuses the scanner and results in messier, imperfect data.

The problem with this low-resolution noisy data is that it distorts reality. The most valuable element that reality capture technology brings to a project is the detailed information about the existing conditions of a site. For example, a company wants to route new systems around the existing systems of the two mechanical rooms above. Using the infrared data of the room on the right, approximate measurements can be taken. Designing the new system will either require assumptions to be made or that an employee go out and re-measure, both of which essentially defeat the purpose of having the scan done in the first place, and waste time and money. But with the laser scan data as seen in the lefthand image, the designer can be certain that everything in the dataset is a reflection of the site down to 2mm, and route the new systems accordingly.

Tying the data collected in the field to verified survey control is single-handedly the most important feature of a traditional laser scanner to a professional working in AEC. The data quality is important to show what’s actually out there, but it has to be tied to survey control to show where the real world conditions exist in relation to the real world. Measuring the XYZ position of the scanner in the field in relation to a real world coordinate system with 2mm accuracy is the most reliable way to do so.

Establishing a control loop also enables future scanning of smaller sections of a site after renovation or build-out. Whenever this can be done without rescanning an entire site, you save time and money.

For data to be useful, it needs to be objective. Traversed laser scanning tied to survey control is the most objective capture option.

Registering point clouds together without traversing is a step toward subjectivity. Let me explain how. When it comes to clash detection between a site’s existing conditions and the model, the laser scan data and the model have to be tied to the same real world coordinate system. Without using known points, whoever’s processing the data has to randomly pick a spot in the data (usually a well-defined corner) and then pick the same spot in the model to make the origin points match. After exporting the data on the matching coordinate system, the data can be overlain on the model and it is considered ready for use.

Second, the model can be wrong. It seems unnecessary to say, but the reason you’re gathering existing conditions is to check how and where they don’t match the plan in order to update it and move forward from an informed position. By scanning at all, it’s assumed that from plan to construction, things don’t always turn out exactly as intended. So as soon as construction begins, the model is no longer current. If you’re tying the data to a corner that wasn’t built according to plan, then elsewhere on the property it might look like an error when the corner itself is the error. This can become an incredible complication on a project where multiple groups are doing reality capture separately and tying it all to the CAD coordinate system.

Between laser scanning and 3D scanning alternatives, you get what you pay for. When you put your money into a second-rate option, you get second-rate results. And if you’re spending any amount of money, why not put it into something that holds value?

You have cost-efficient options when deciding how to implement laser scanning on your job site. Here are some helpful tips:

It starts before the contract. Hopefully, your provider will be asking you what you intend to do with the data. But if not, make sure to tell them what you’re using it for and make sure they can deliver for that intended use. This will mitigate misunderstandings early on. For example, if you need a Revit model, the provider can include that cost in the proposal from the start.

Next, if you’re importing data that’s too bulky, don’t give up! Give your provider a call. They should be able to lighten the file size or the number of points you’re importing. That will free you up to worry about the actual intended use, not just trouble-shooting problems they should be well-versed in solving. And if they somehow don’t know how to do it, hire a consultant! Make the data work for you.

Lastly, if you don’t already have a workflow to implement data into your planning and design, hire a consultant or let your provider get you up to speed on best practices. There’s no point if you aren’t using the data. Find someone well-versed in the various types of 3D software who can assist you in getting set up for success.

Getting Back on Track

Traditional laser scanning tied to survey control is the only method of 3D capture that produces baseline data of the quality and reliability required for AEC industry use. Good data in the right workflow will prove itself invaluable to you and your team.

Here are some questions to ask your laser scanning provider before hiring them on your next project:

And here are the questions your service provider should be asking you:

Remember, if they're not asking, be sure to tell them your intended use. And ask them if they can deliver. You're the one who needs the data.